AGENDA – THRESHOLD HOUSING SOCIETY ANNUAL MEETING
20 SEPTEMBER 2017
Time: 6:30pm
Place: St Matthias Anglican Church, 600 Richmond Ave, C/D Room
(Lower level, Church Hall)
1. Welcome and call to order – John Reese, Board Chair
2. Declaration of a quorum (Bylaw 4.2, the lesser of 20% of members or 10 members present)
3. Minutes of 2016 AGM, (attached) – Don Storch, Secretary. Minutes were approved by the board as per resolution at last AGM.
Motion: That the board of THS approve the minutes of the 2017 AGM,
4. Audit for 2016-2017 – (attached) Karen Blakely, Treasurer
Motion: That the 2016-2017 Audit be approved as circulated.
5. Appointment of Auditor for 2017-2018 – Karen Blakely
Motion: that the firm of Dickson, Dusanj & Wirk Chartered Professional Accountants be appointed as Auditors for THS for the 2017-20118
Fiscal year.
6. Reports: Board Chair and Executive Director
a. Nominations Committee report: Presented by Don Storch
b. Nominations from the floor
c. Motion: to elect the slate of board members as presented.
7. Questions from the floor:
8. Thanks and Adjournment:
9. Coffee and social time.
Threshold Housing Society
Annual General Meeting Minutes
Wednesday, June 29, 2016
7:40 pm – 8:15 pm
St. Matthias Anglican Church Hall
600 Richmond, Victoria, BC
1.  CALL TO ORDER
Board Chairperson, Dr. Dennis Anholt, called the Meeting to order at 7:40 pm.
2.  CONFIRMATION OF QUORUM
The minimum 10 member quorum was met.
3.  APPROVAL OF AGENDA
MOTION (M/S Carol Martin/Mary-Clare Carder) that the Agenda for the Meeting be approved as circulated.   CARRIED.
4. 2015 ANNUAL GENERAL MEETING MINUTES
As authorized by resolution at the 2015 Annual General Meeting, the minutes of that meeting were approved by the board of directors.  A copy of those approved minutes was circulated to the members with the notice of the 2016 Annual General Meeting.
5.  CHAIRPERSON’S REPORT – Dr. Dennis Anholt
–  A written report from the Chairperson entitled “President’s Report” was circulated to the members with the notice of this meeting.  Dennis highlighted items from the report including the following:
• Thanks were expressed to all in attendance, as well as staff, volunteers, board members, Eclipse Creative for promotional work, and the HeroWork program for the renovation of Forrest House.   Particular thanks were expressed to departing board members, Pieta VanDyke and David Lefsrud, for their hard work and contributions to the Society.  Both members were presented with hand-made quilts in recognition of their service.   Prospective new board members were welcomed.
•  The continued expansion of Threshold’s programs was referenced including the upcoming opening of “Threshold House” in Oak Bay and the possibility of future expansion to the West Shore.
MOTION (M/S David Lefsrud/Devona Harlow) that the “President’s Report” be accepted as presented.  CARRIED.
6. TREASURER’S REPORT – Treasurer, Karen Blakely
–  A written report from the Treasurer and the 2015/16 audited financial statements of the Society were circulated to the members with the notice of this meeting.  Karen highlighted aspects of these documents including the following:
• The audit of the financial statements were completed by independent auditors, Dickson Dusanj & Wirk Chartered Professional Accountants, and were released without qualification.  It is expected those statements will be posted on Threshold’s website in the next couple of weeks.
• Threshold’s finances continue to be in a healthy and stable position.  Threshold had an operating deficit of $23,070 in 2015/16 but $16,299 of that was an unrealized market loss.  Threshold’s total net assets remain in excess of $1.5 million. MOTION (M/S Carol Martin/Mary-Clare Carder) that the Society’s 2015/16 audited financial statements be accepted as presented. CARRIED.
7. EXECUTIVE DIRECTOR’S REPORT – Executive Director, Mark Muldoon
–  A written report from the Executive Director was circulated to the members with the notice of this meeting.  Mark highlighted aspects of the report including the following:
• Threshold has experienced an explosive growth in its programs over the past 6 years.
• The 18 to 25 age range is the fastest rising segment of Canada’s homeless population.
• With our professional and compassionate staff and the continued support and encouragement of the board, Threshold will be up to the challenge and can help end youth homelessness in our area.
• As part of our plan to up our game in fundraising, Joanne Roberts has been retained as a community relations person.  She has been a marvellous addition to our team and I am grateful for her assistance as well as for the work and dedication of our board, volunteers and staff. MOTION (M/S Gwen Anholt/Gerry Howell Jones) that the Executive Director’s Report be accepted as presented. CARRIED.
8.  OTHER BUSINESS
a. ELECTION OF DIRECTORS
MOTION (M/S Dennis Anholt/Carol Martin) that the following individuals be elected to the Board of Directors:
Michael Shepherd (second term)
Donald Storch (first term)
Guy Dagenais (first term)
Andrew Reeve (first term)
CARRIED.
b. APPOINTMENT OF AUDITORS
MOTION (M/S Karen Blakely/Daniel Fraikin) that Dickson, Dusanj & Wirk Chartered Professional Accountants, be appointed as Auditors for the Threshold Housing Society for the 2016/17 fiscal year.  CARRIED.
c. MOTION RESPECTING APPROVAL OF 2016 AGM MINUTES
MOTION (M/S Dennis Anholt/Carol Martin) that the board of directors of the Threshold Housing Society be designated to approve the minutes of the 2016 Annual General Meeting.  CARRIED.
9.  ADJOURNMENT
The meeting adjourned at 8:15 pm. 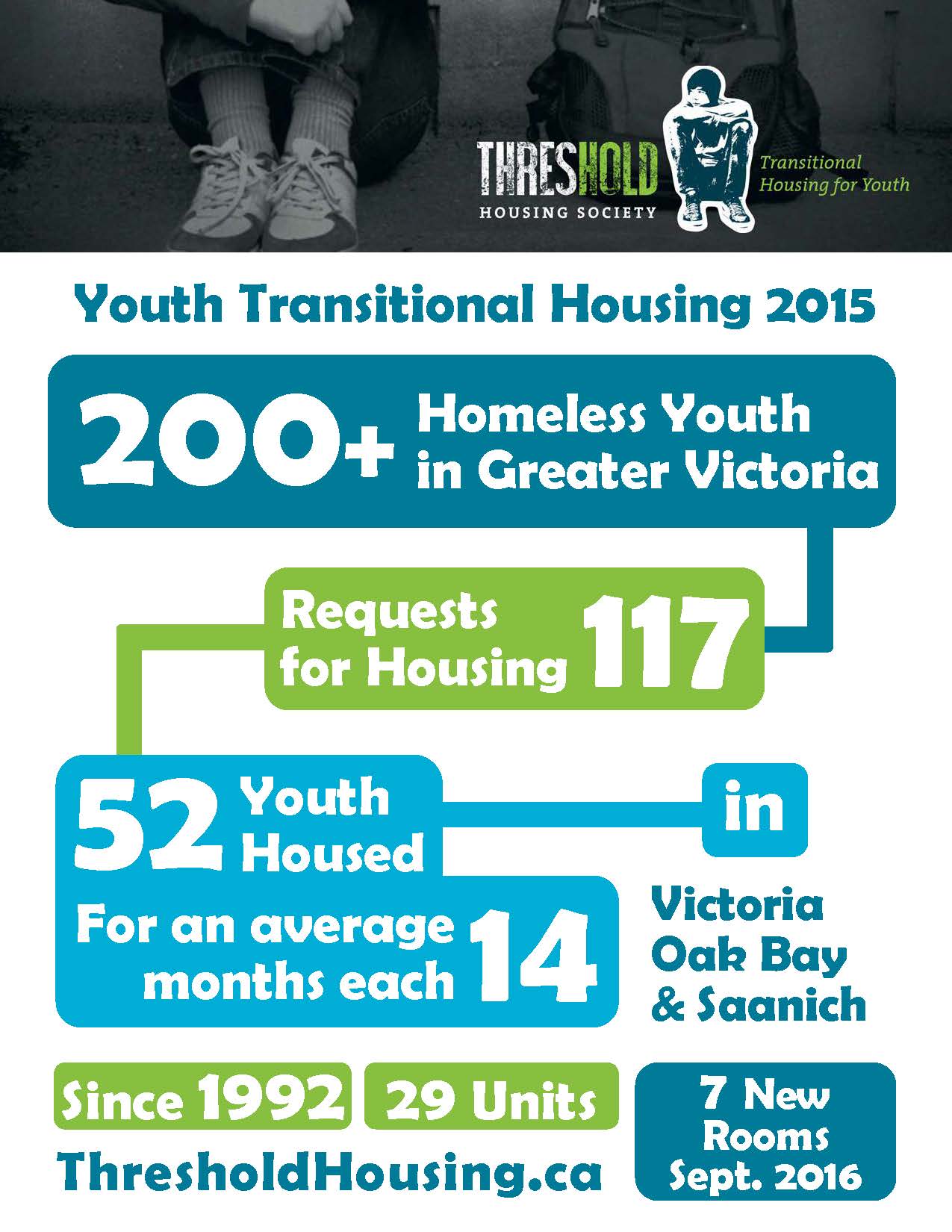 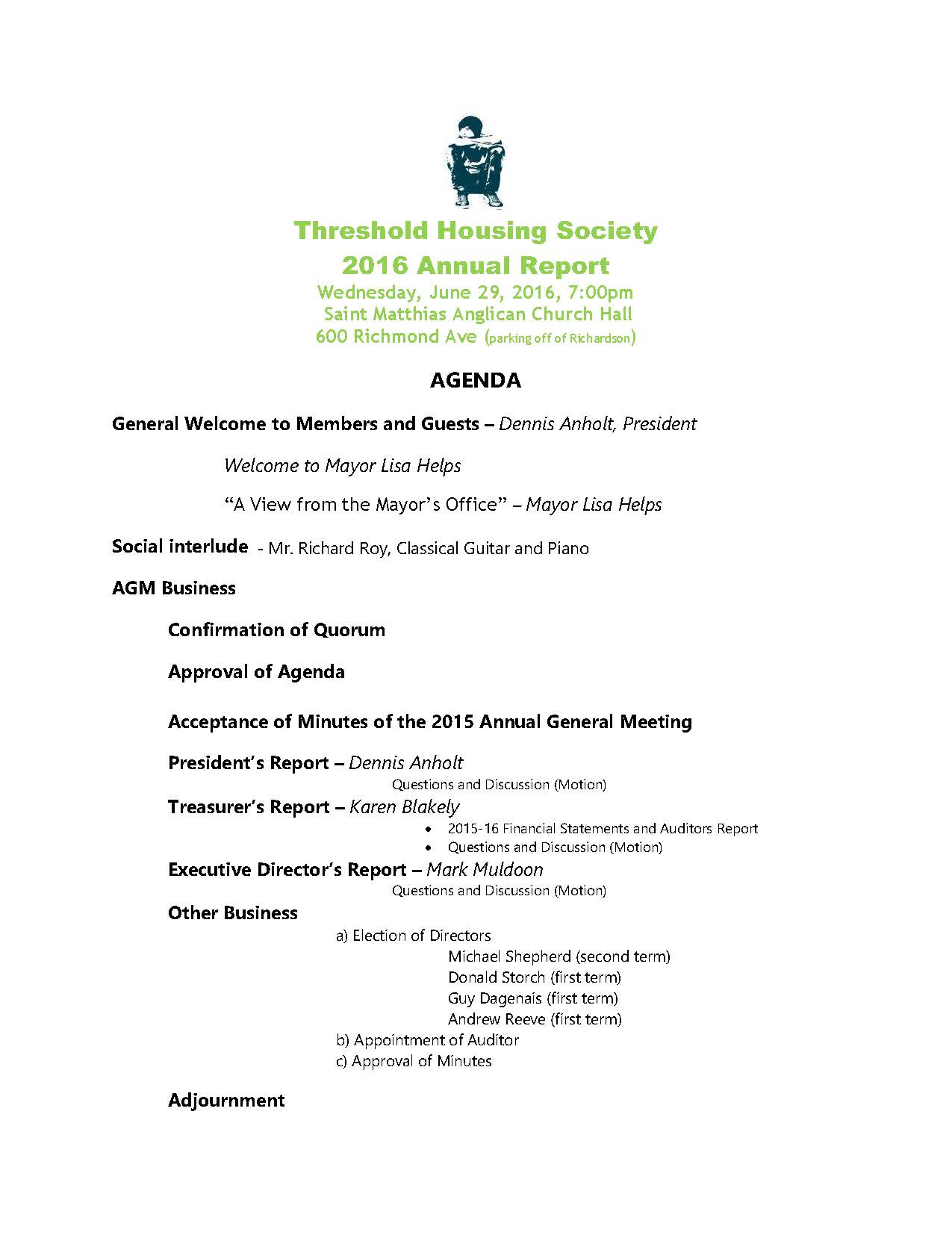 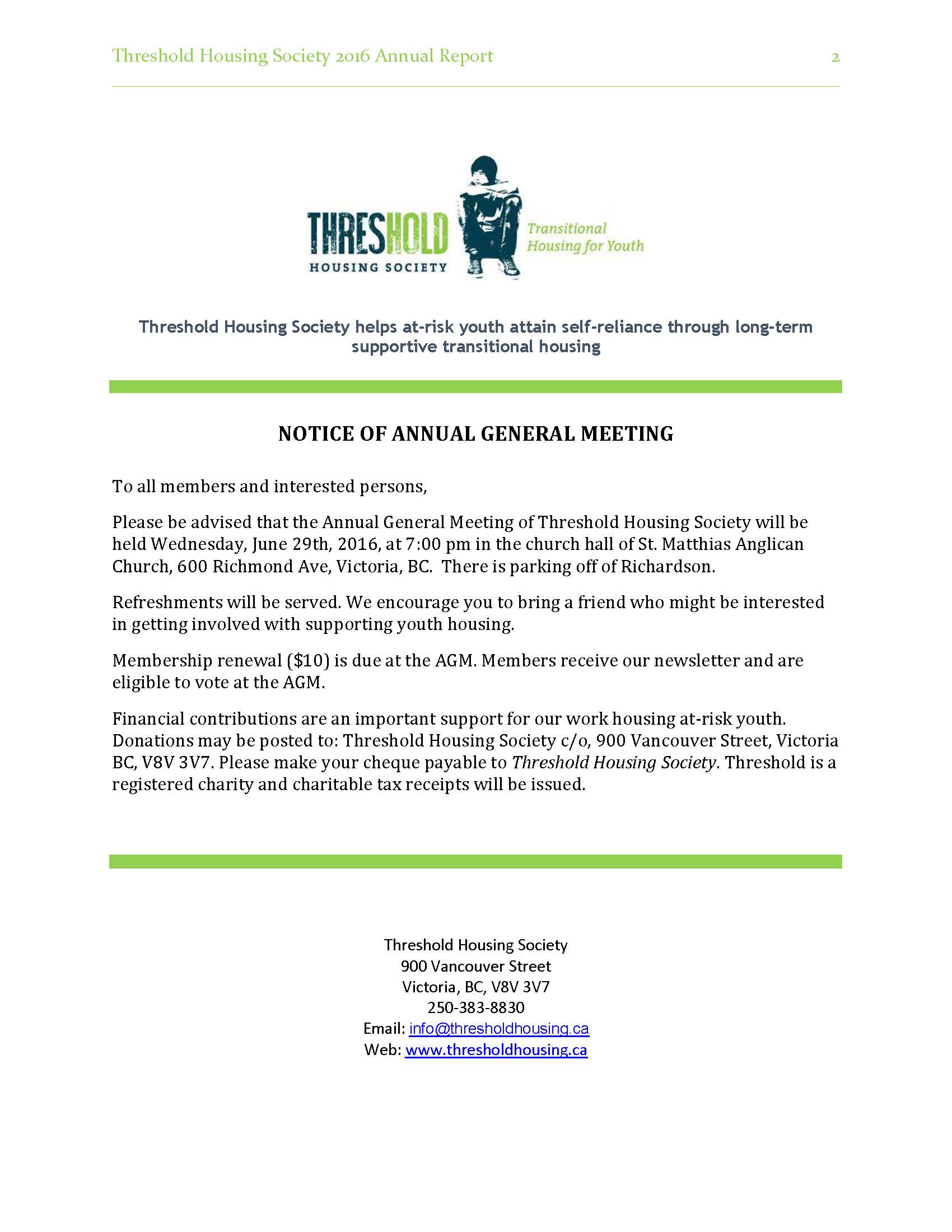 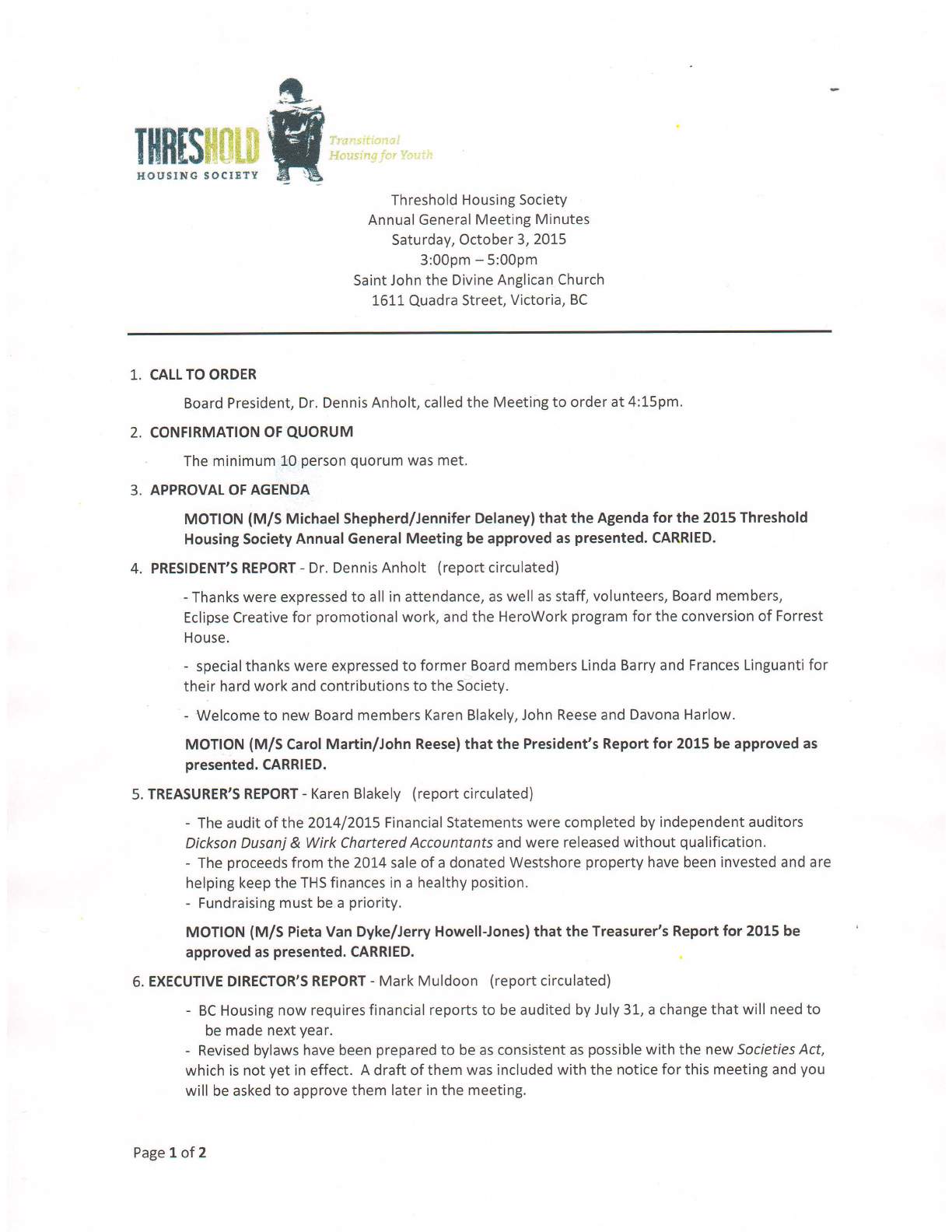 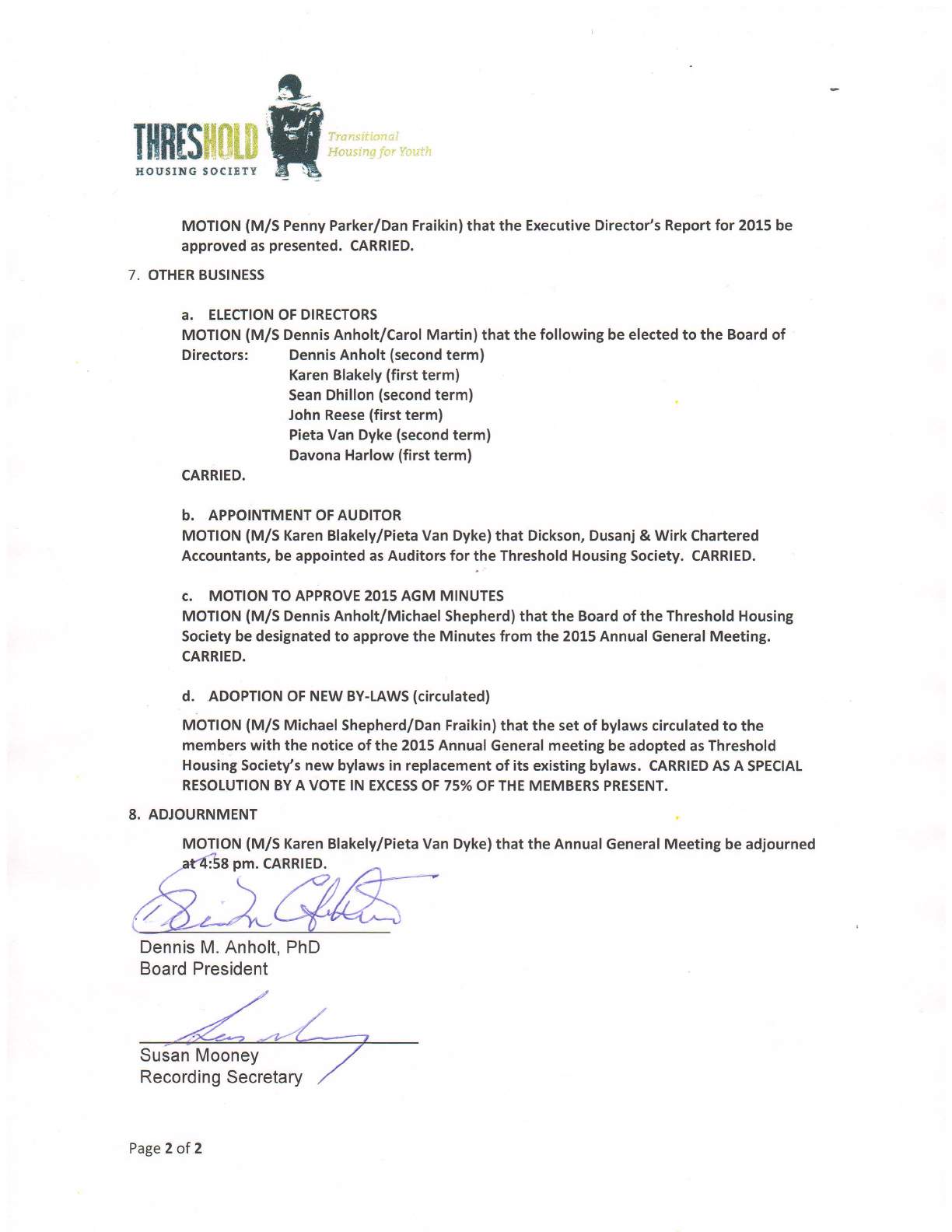 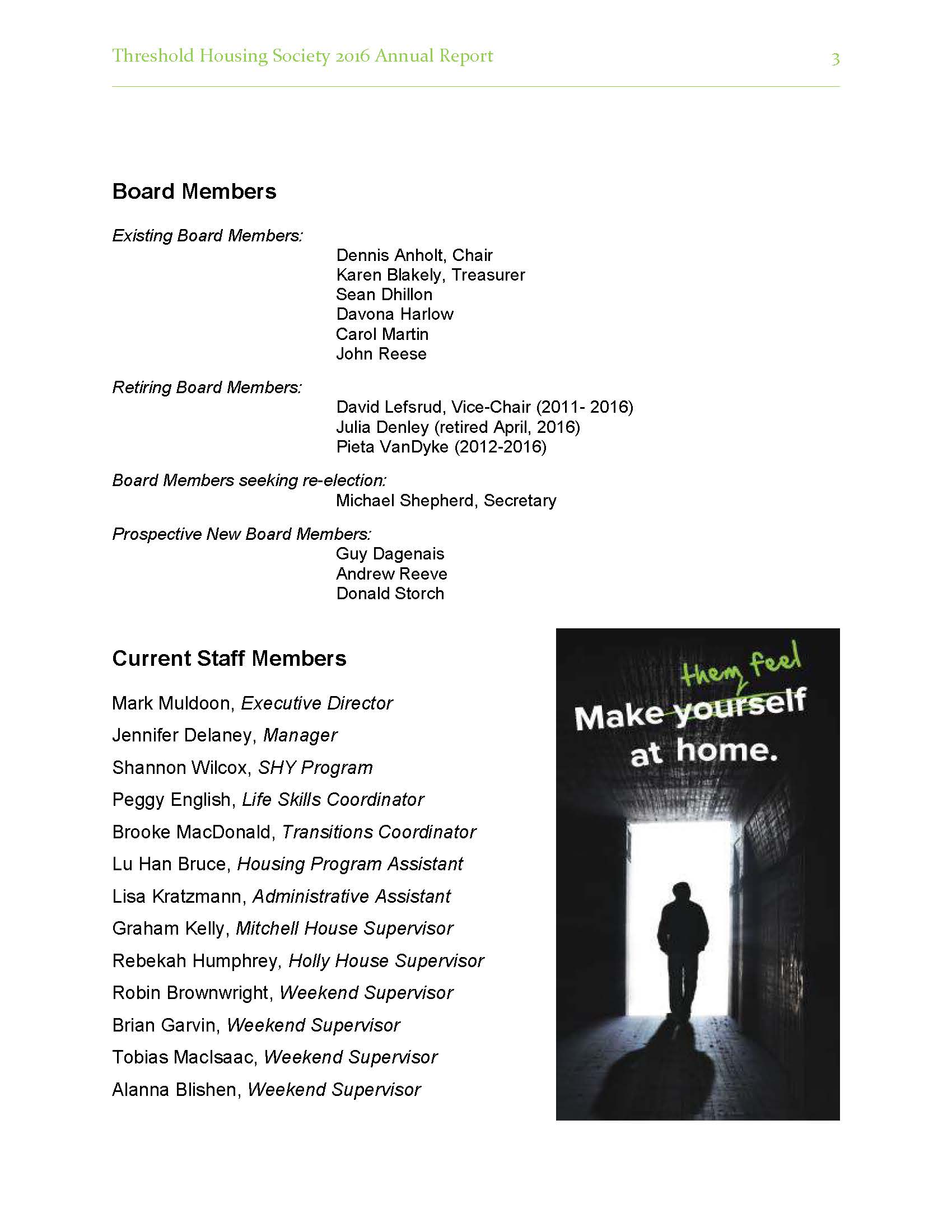 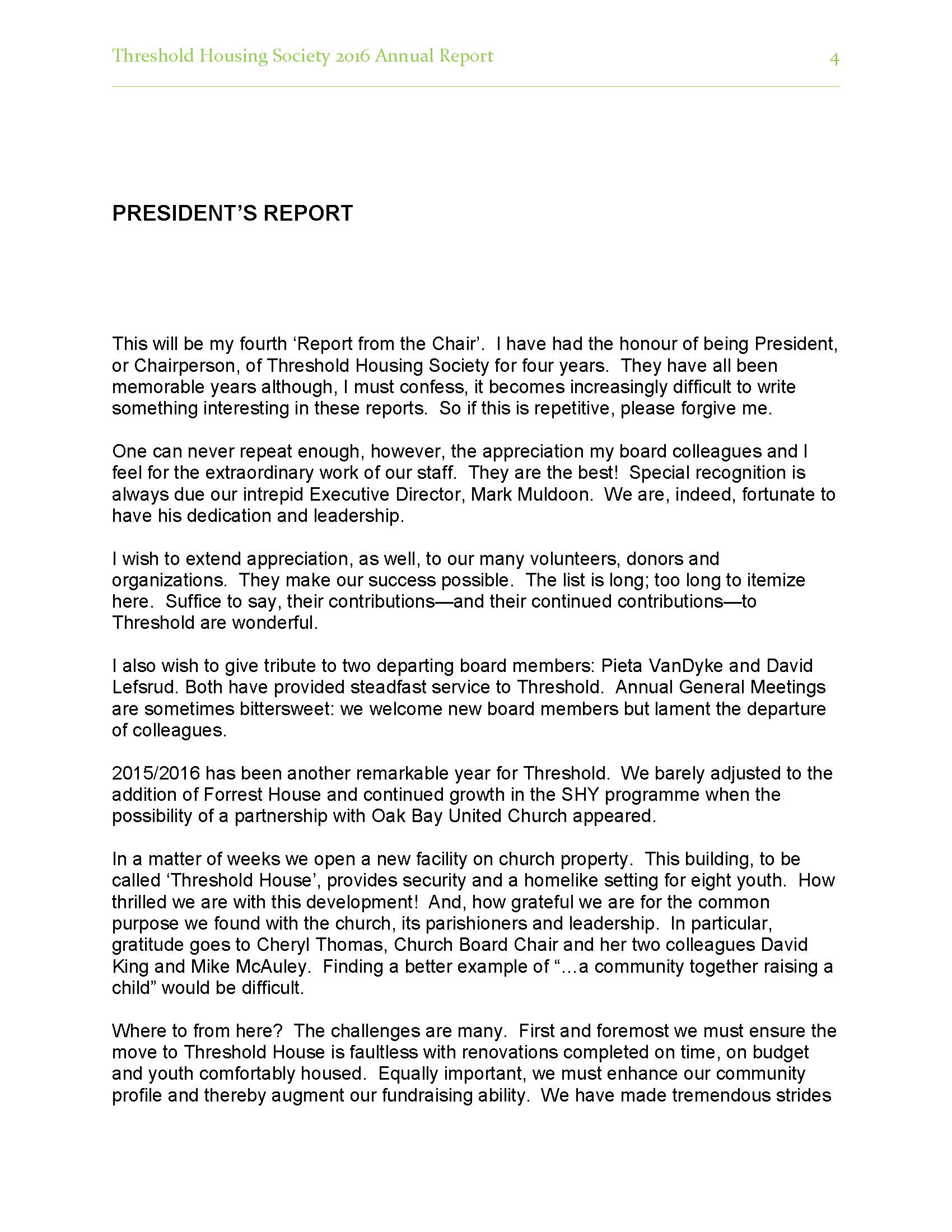 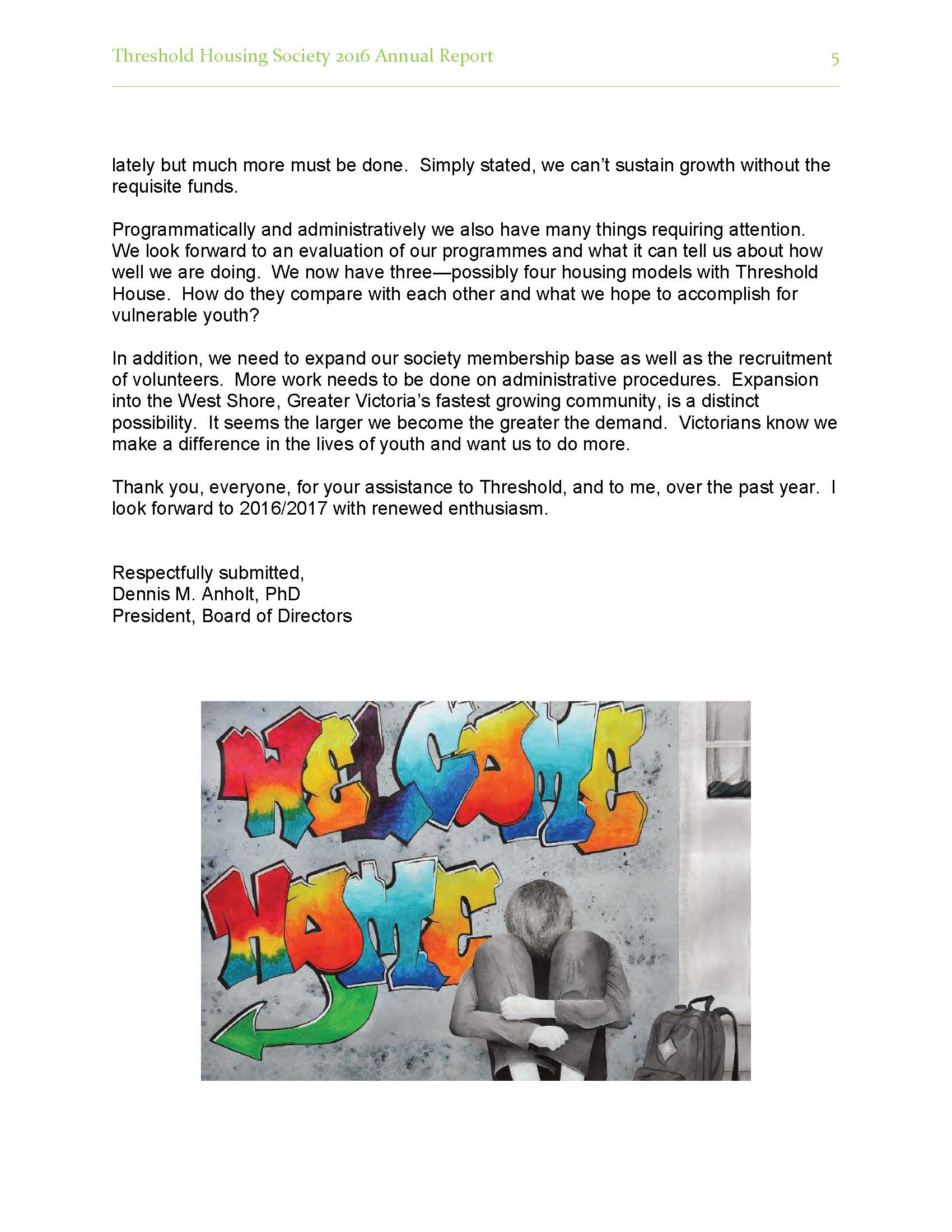 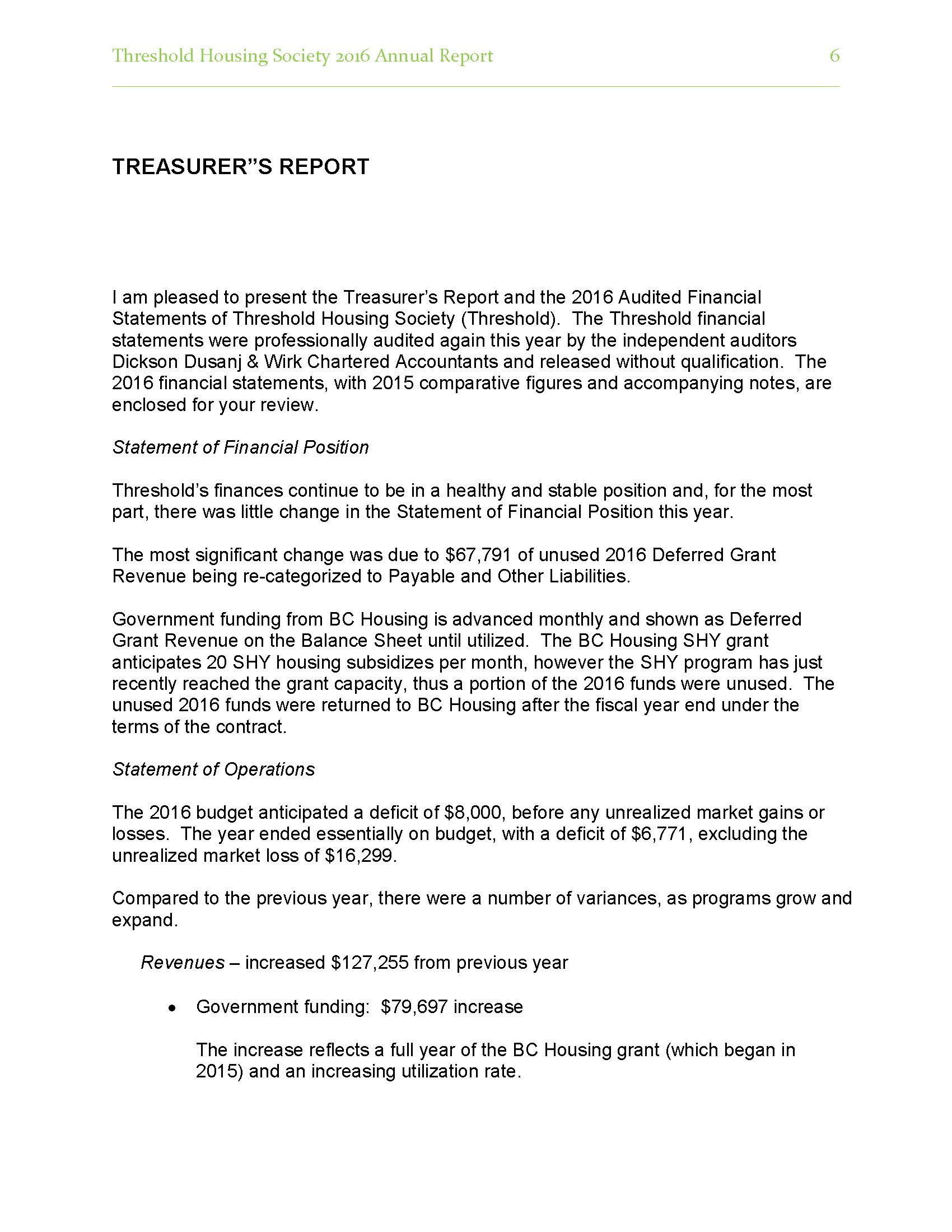 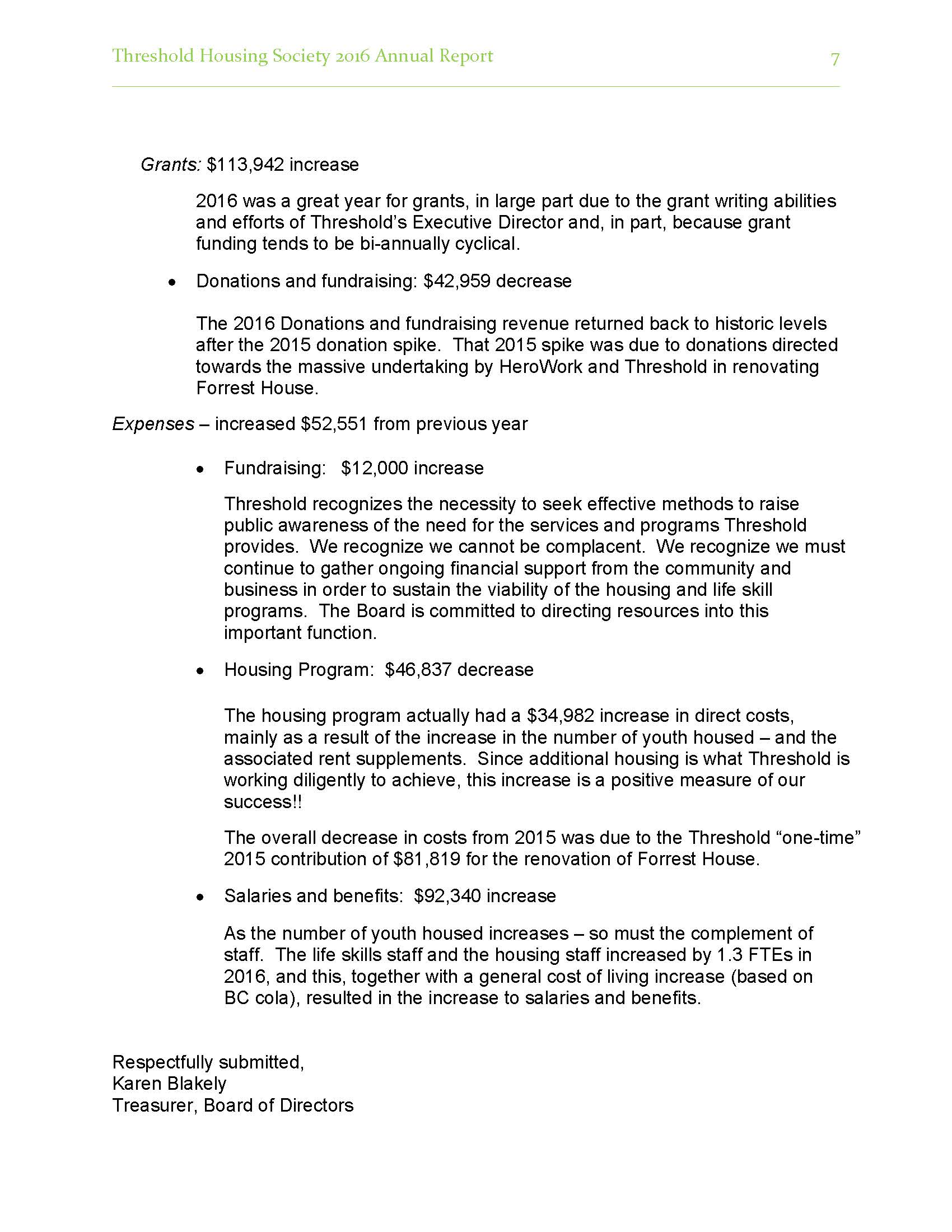 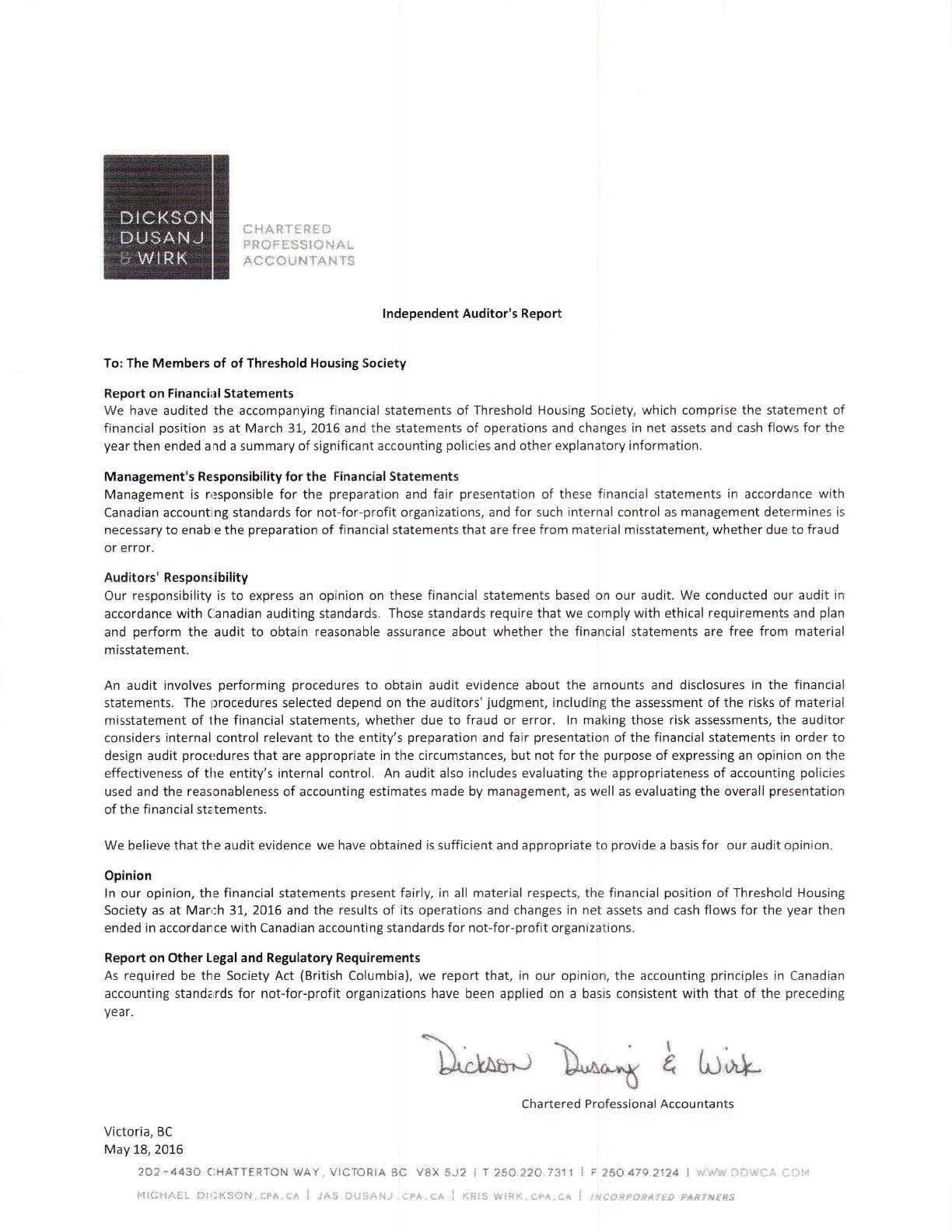 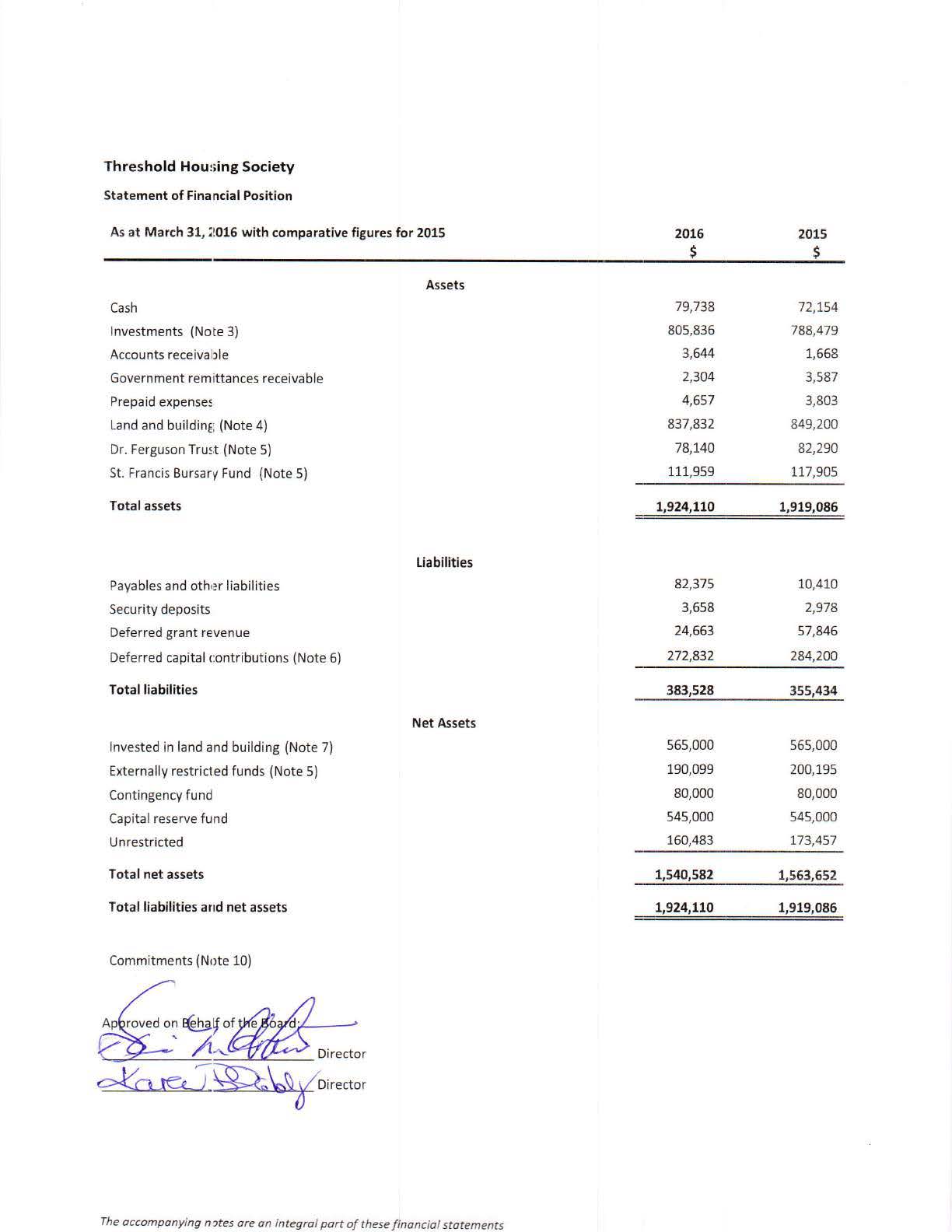 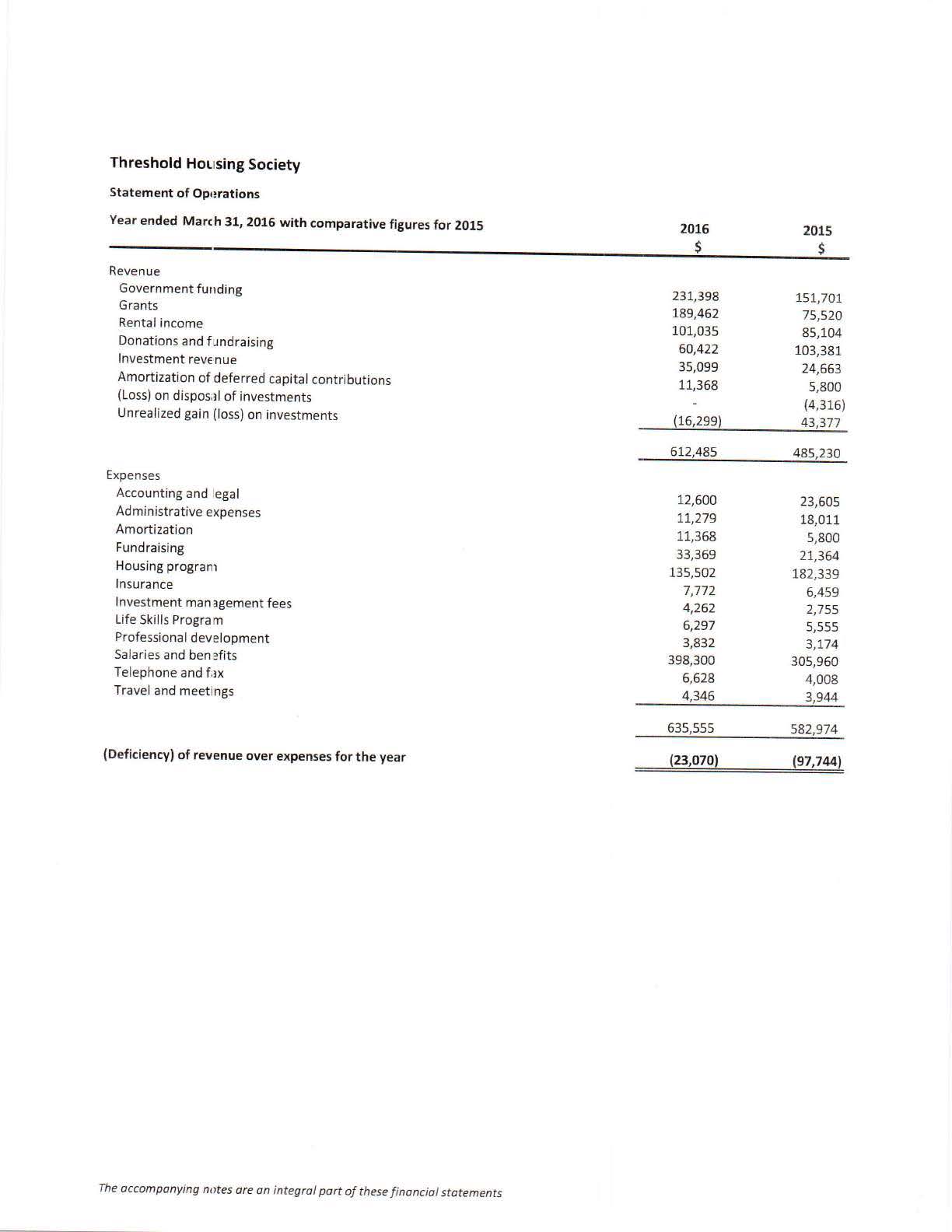 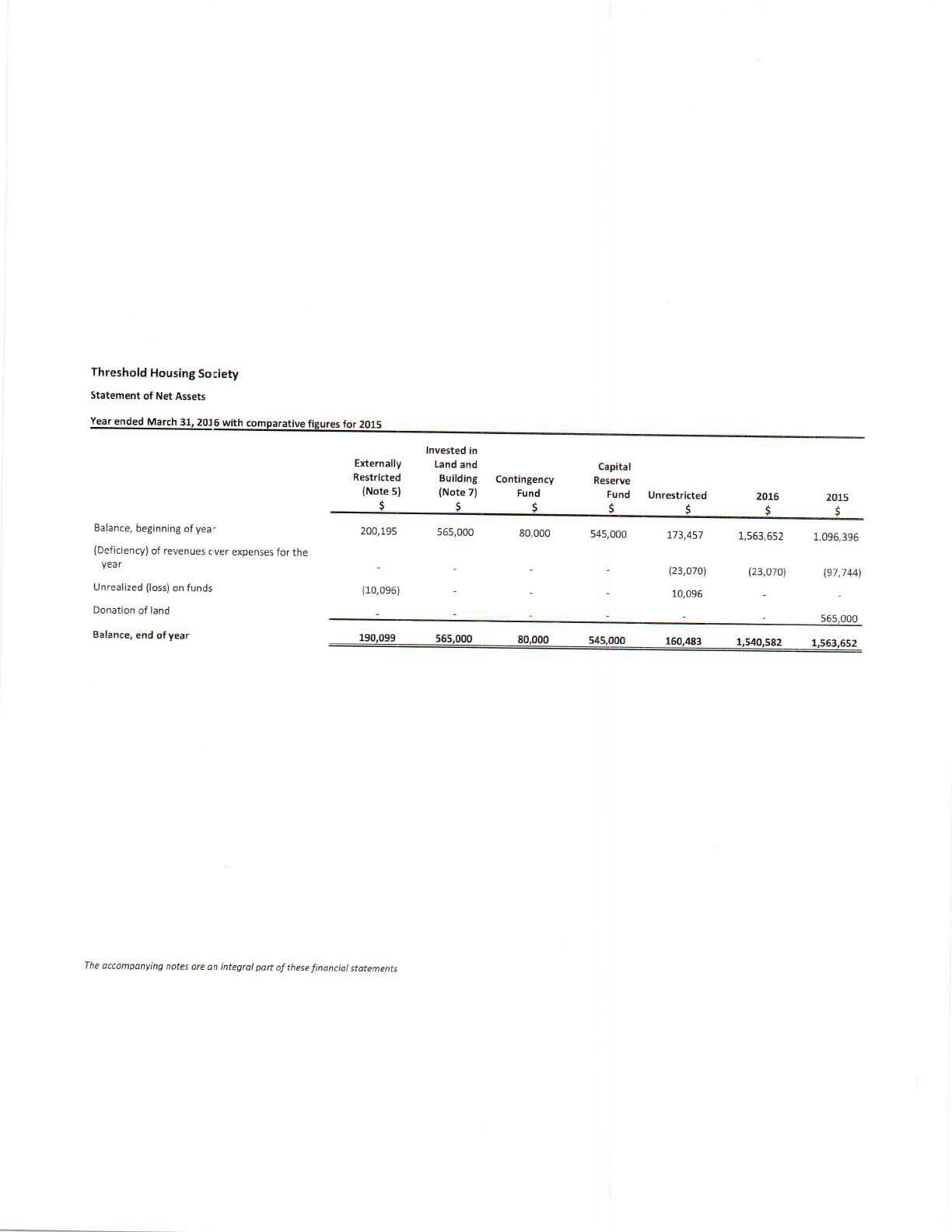 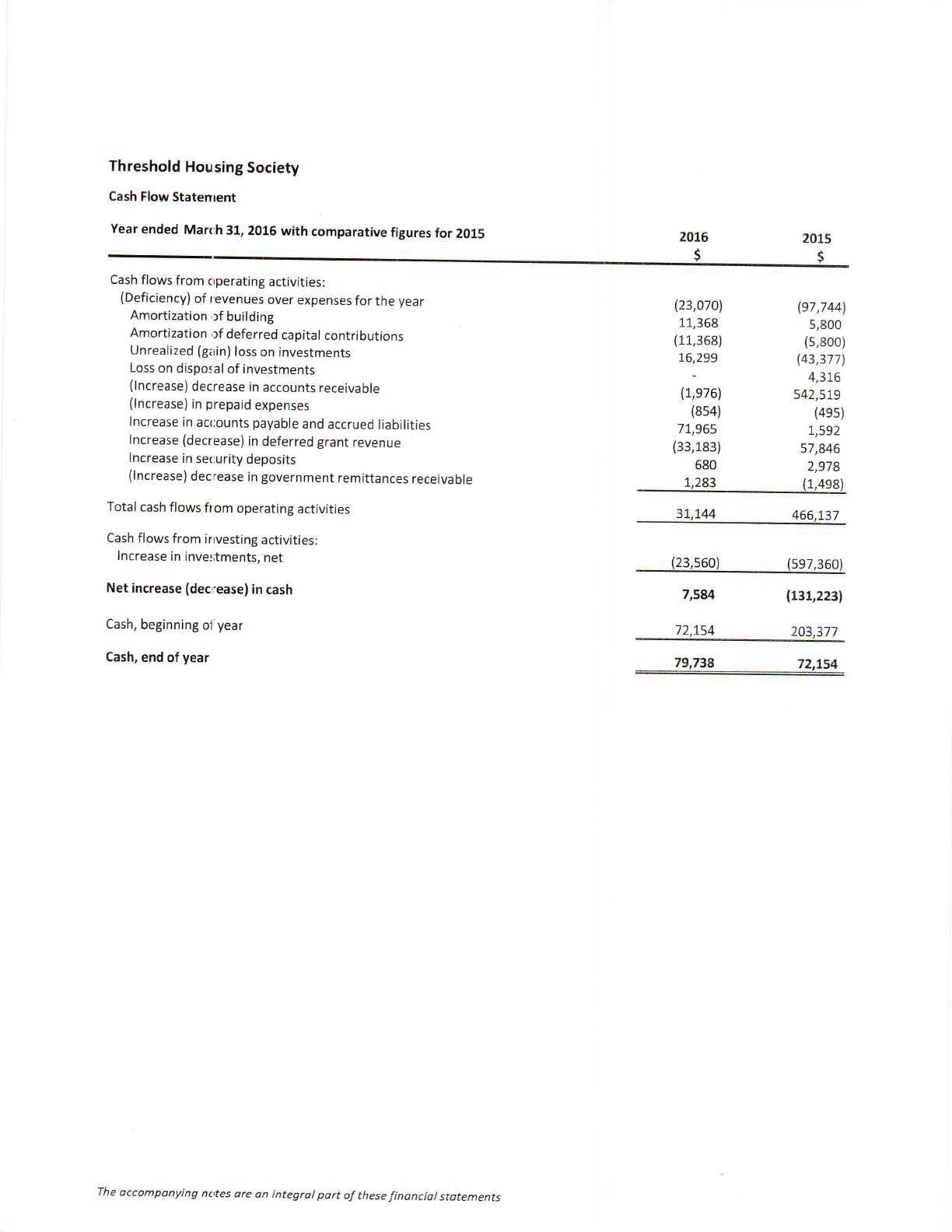 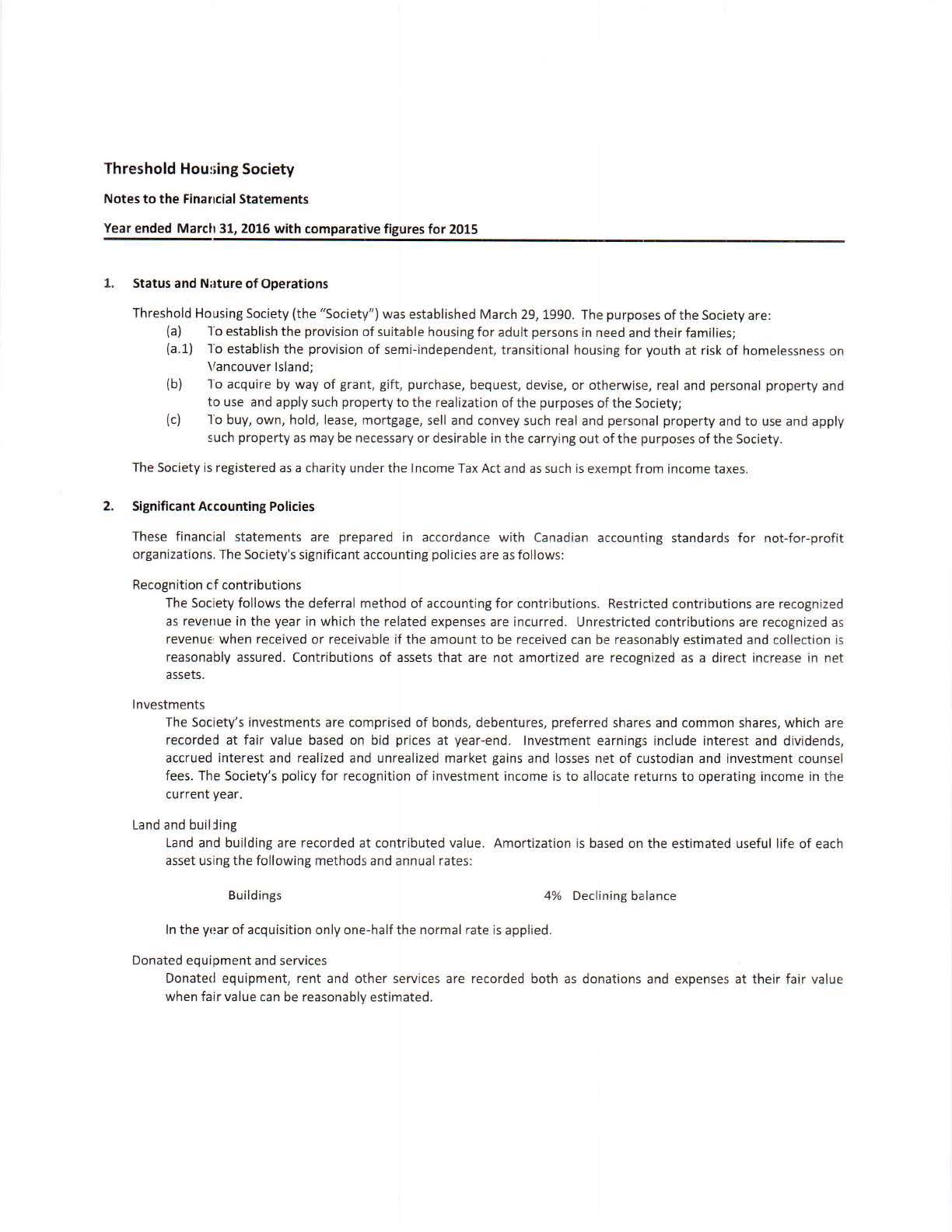 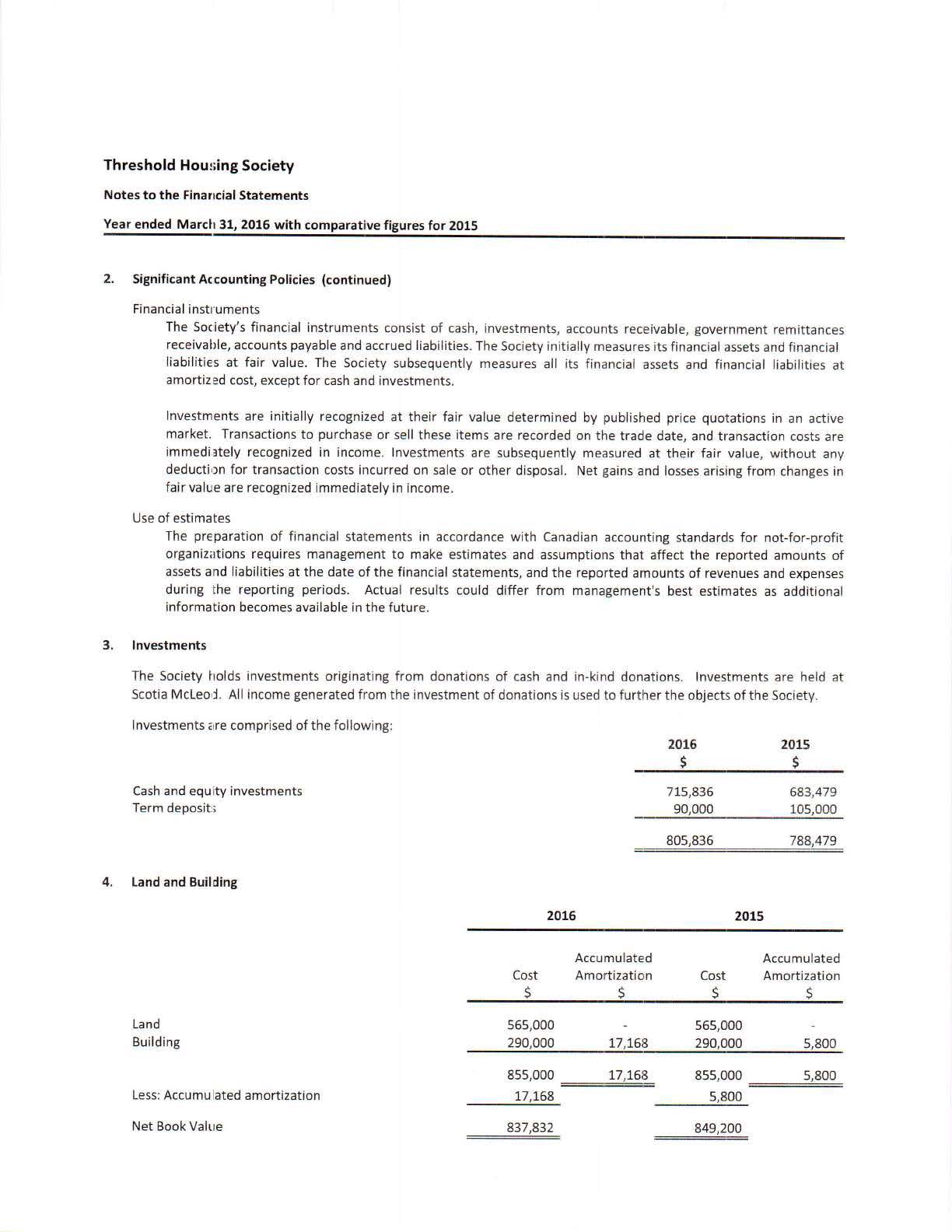 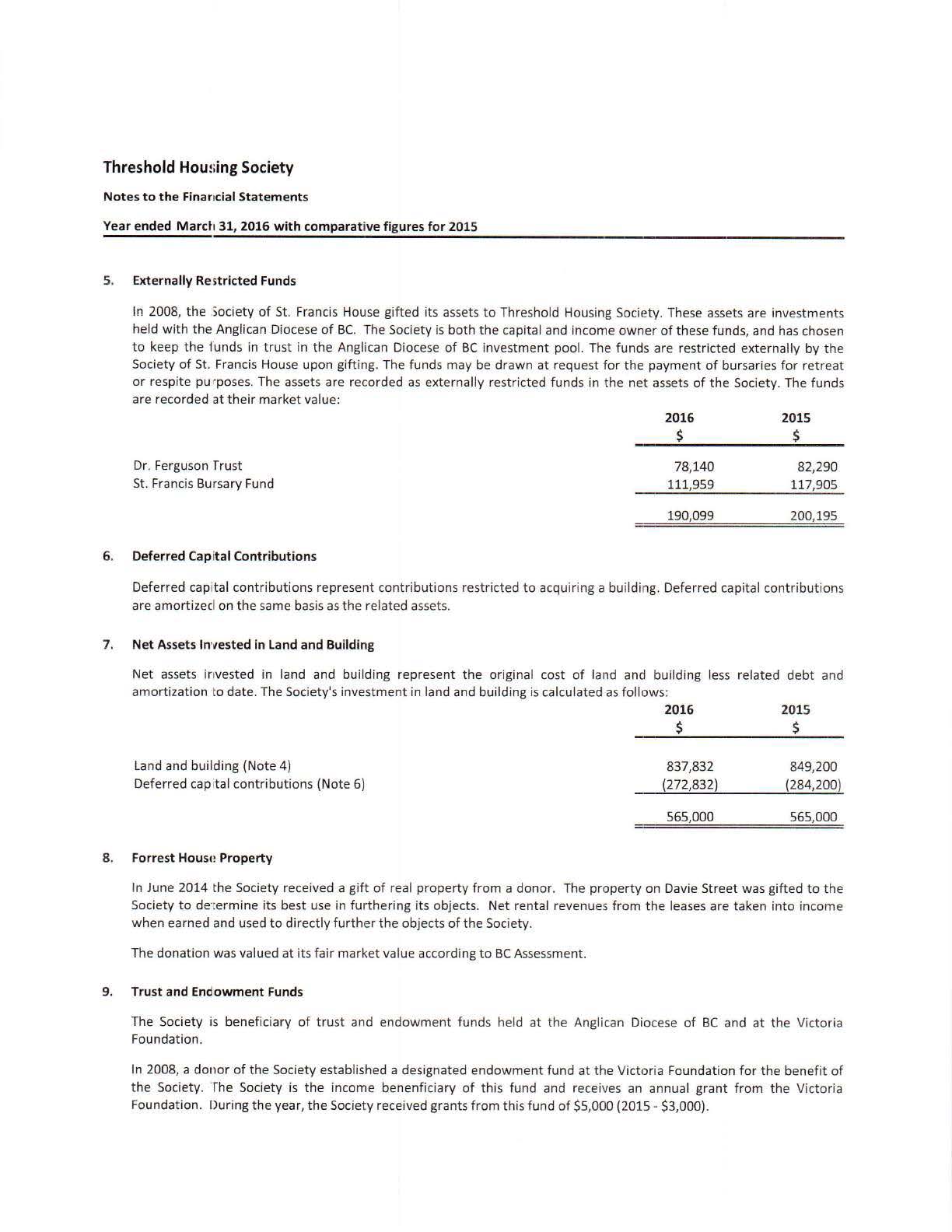 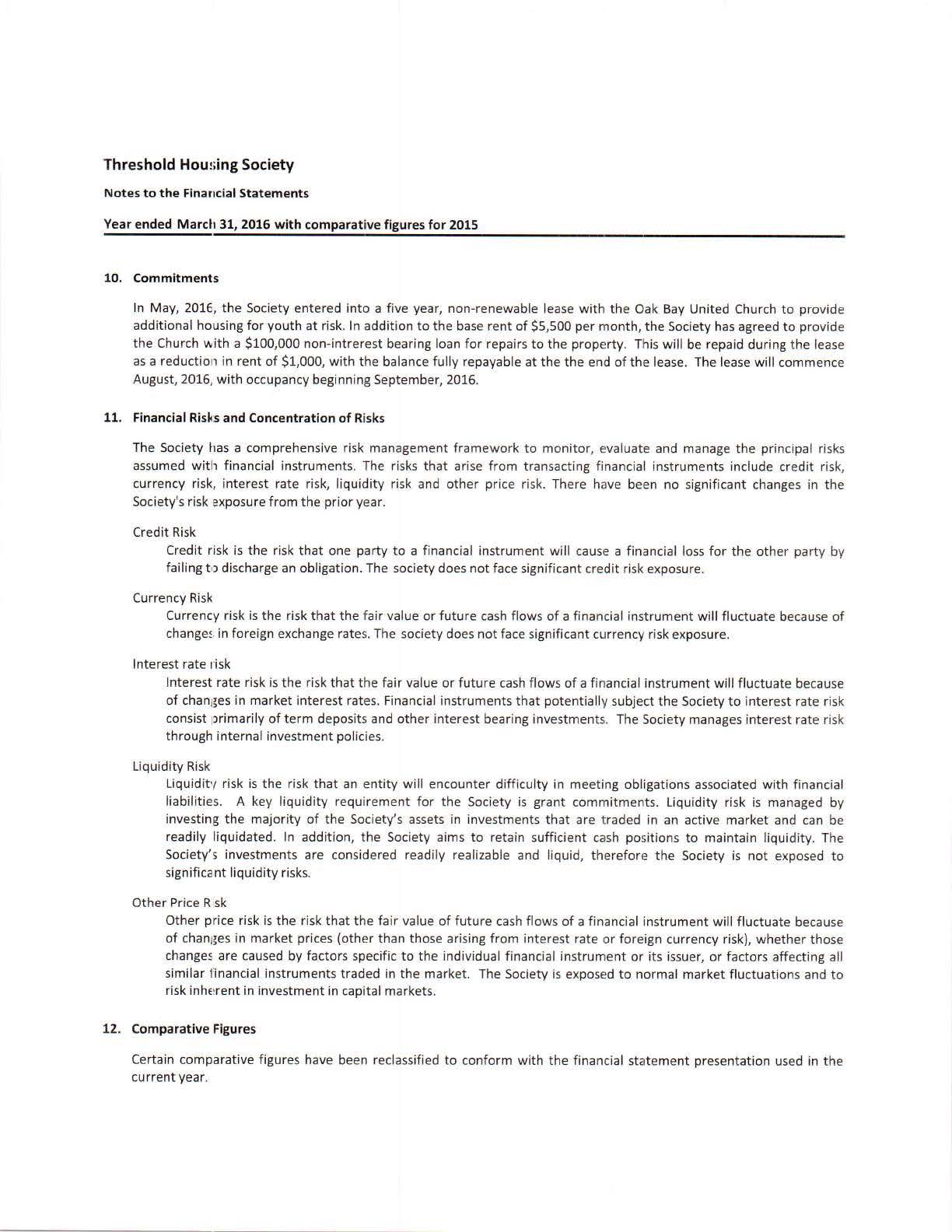 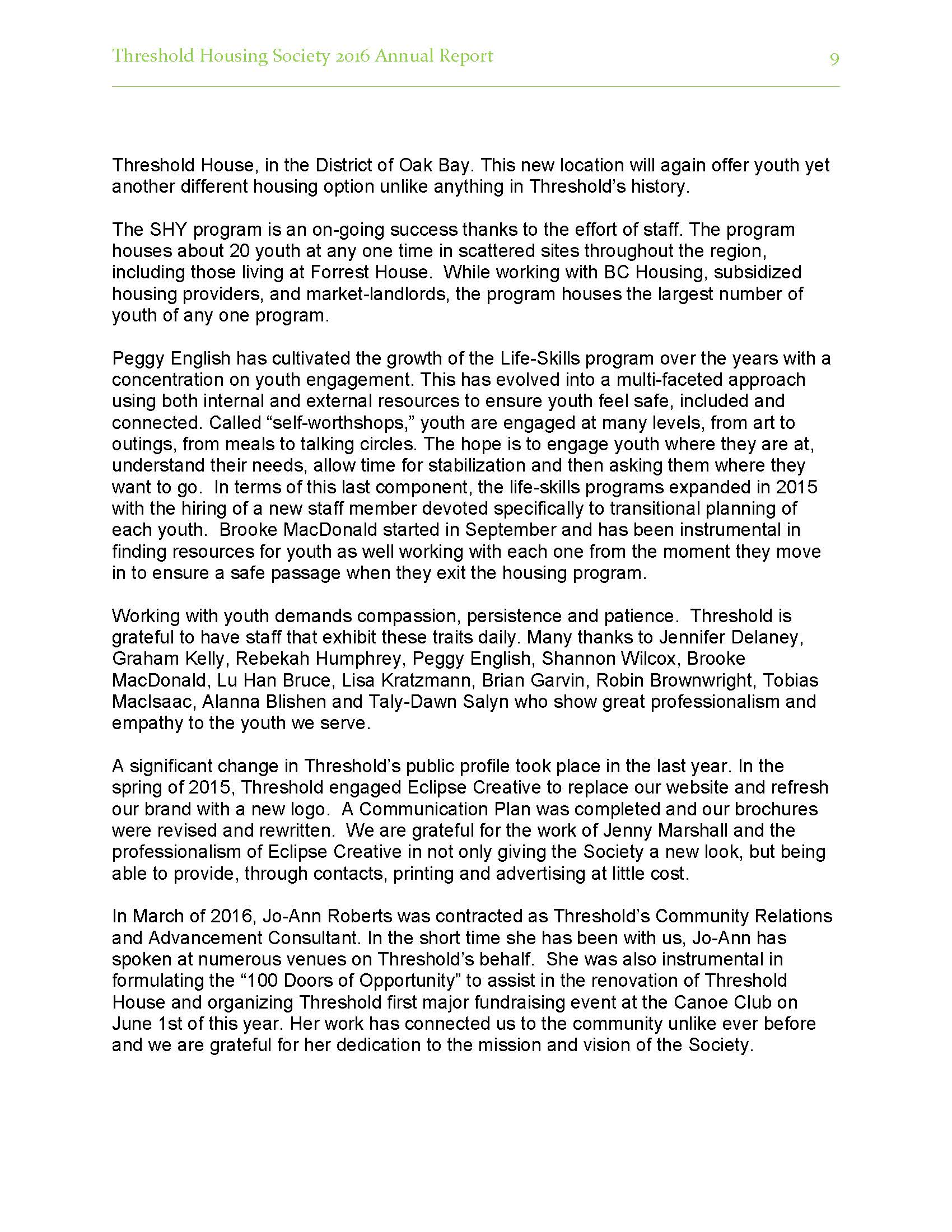 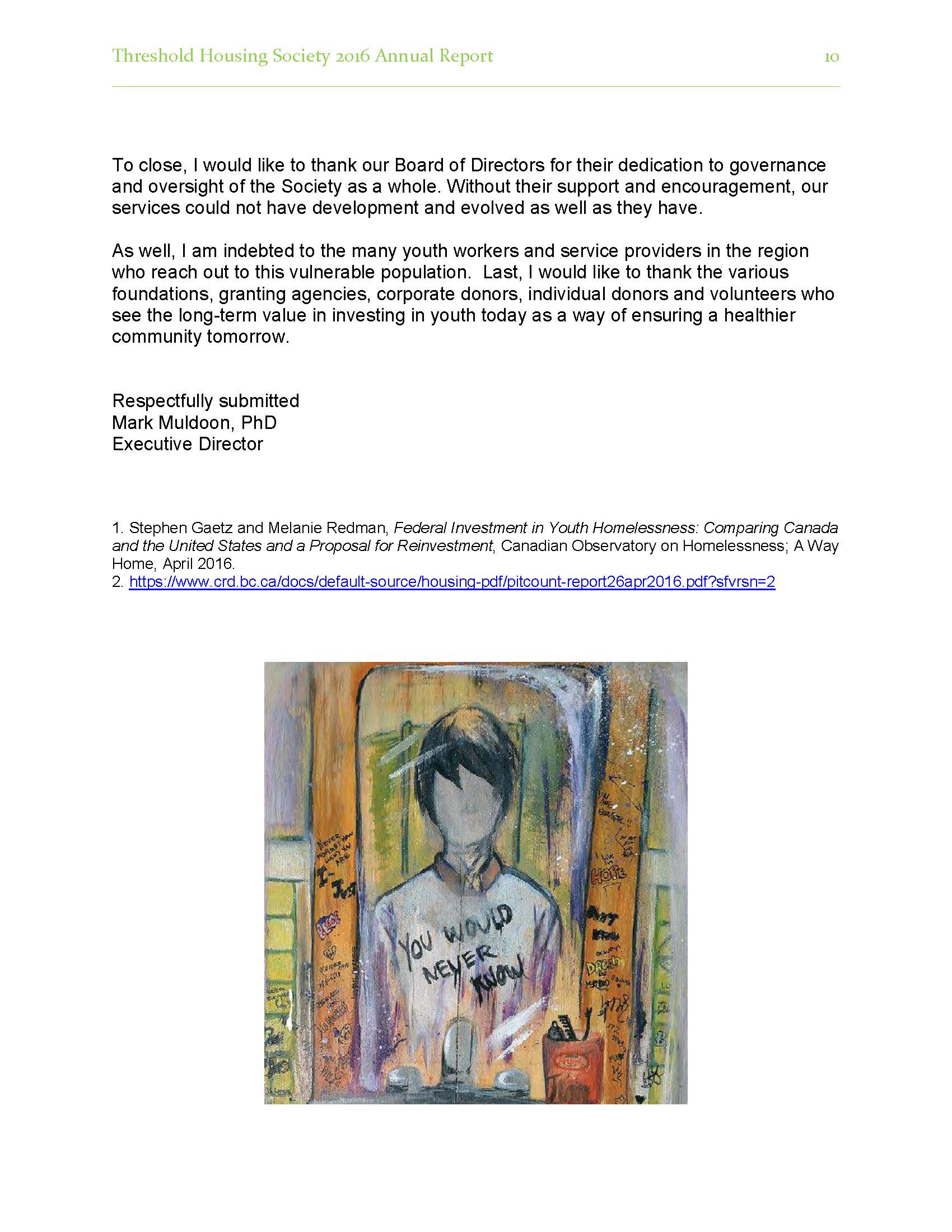 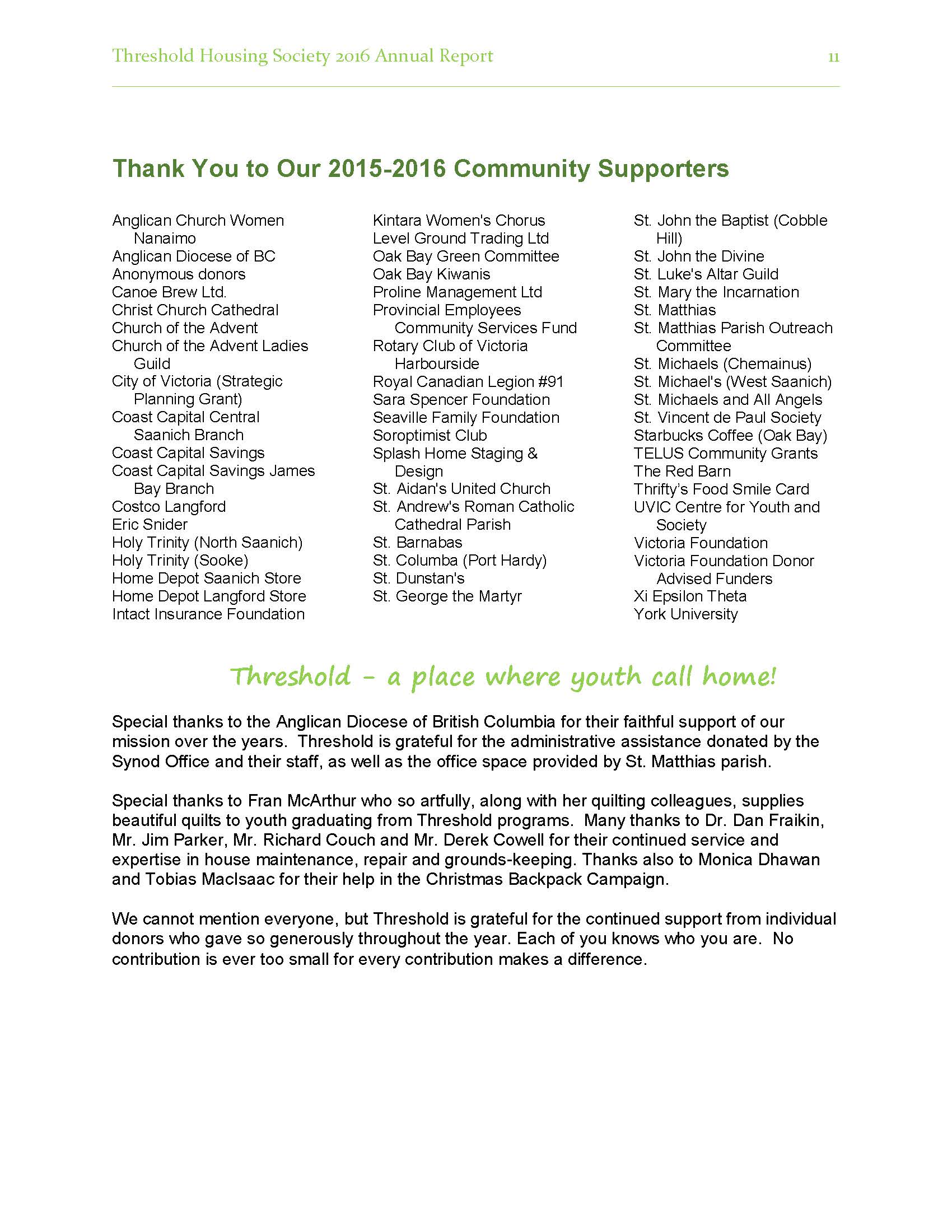